Home» About Us » News

Read news stories from Capps to keep up with all things going on.

WICHITA, Kansas —The Wichita City Council approved a property tax exemption on Tuesday that should keep aircraft jobs in Wichita. Capps Manufacturing is expanding its business to do work for Hawker Beechcraft. It is work that could have been sent to Mexico.
“My father, Barney Capps, started the company in the 60’s in our two car garage,” said Ron Capps.
Today the company takes up the better part of a city block in southwest Wichita. Capps employs more than 150 people and is about to grow.
“Hawker Beechcraft is closing Plant One,” said Capps. “It’s in their long-term plan. That’s fabrication work and that’s what we do.”
Capps Manufacturing will buy the equipment Hawker currently uses, build the parts, and sell them back to Hawker. This keeps work in Wichita that may have otherwise gone elsewhere.
“Between now and the end of the year we will probably add around 31 jobs,” said Capps. “The average wage will be around $40,000 a year.”
It’s not a first for the homegrown company. In the past, Capps has brought jobs from Mexico to Wichita, a move praised at Tuesday’s City Council meeting.
“They just weren’t happy with the work quality down in Mexico,” said Michael O’Donnell, Wichita City Council member.
The current expansion is thanks to an 80 percent property tax exemption approved Tuesday by the City Council. It’s a deal that will last at least five years and could be extended to 10 years.
In return, Capps will invest $2.2 million for equipment and a 27,000 square-foot building.
In all, the deal costs Wichita $8,250 in lost taxes, but the city estimates its return on the investment to be 1.83 to 1.
“It’s a win-win for everybody in the state and city,” said Capps.
A city that’s seen many jobs go south of the border, this time bringing them back the other way.

Instead of outsourcing aviation jobs, a local machine shop puts up the money to keep them. Capps Manufacturing will buy some of Hawker Beechcraft’s equipment. The equipment includes a 750-ton press, 400-ton skin stretch machine and a large-sized heat treat furnace.
Last year, Hawker announced it would stay in Wichita but planned to downsize. The state of Kansas gave the company $45 million to stay and part of that incentive was to try and utilize local suppliers.
For decades Capps Manufacturing Inc. has operated machines to form aircraft parts. “We have no reason to want to leave. We feel very confident and proud we’re able to do this. We’re proud that Hawker has the confidence in us,” said Capps Vice President Ron Capps.
When Hawker shuts down plant one later this year, three pieces of equipment will end up at the Capps facility. If they didn’t end up here, the equipment could have left town possibly outsourced to Mexico. But instead, Capps will invest about $2.2 million and hire 31 more people. Those employees will make an average of $40,000 a year.
Part of the $2.2 million investment includes building a new building to house some of the machines. Capps says they’ll start hiring soon to train people and should have everything in place by this fall. “As long as people are buying airplanes and flying them, we’ll be here making them,” he said.
Since the company is expanding, the Wichita City Council approved a property tax exemption for Capps. The company will receive an 80% exemption over the next five years. Based on the current tax system, the exemption is expected to cost taxpayers $38,387.
Copyright © 2011, KWCH-TV

Premium content from Wichita Business Journal – by Daniel McCoy
Date: Friday, July 15, 2011, 5:00am CDT
Related:
Manufacturing
A new contract with Hawker Beechcraft Corp. will help Capps Manufacturing grow its work force
by about 15 percent and signals that Hawker is making good on its stated intention to keep work
local. 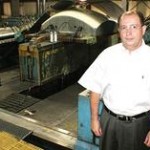 Hawker Beechcraft Corp. is outsourcing to the Wichita company some of the work it had previously
announced would leave its local plant. Capps Manufacturing’s vice president, Ron Capps, says the
work will require him to add 31 employees.
The contract with Hawker will also allow Capps, which is purchasing equipment from Hawker, to
build a 27,000-square-foot, $1.3 million expansion at its plant.
Capps says work on the building, which is being designed and built by Smith Construction, should
begin next week.
The Wichita City Council on Tuesday unanimously approved a five-year, 80 percent property tax
abatement on the new equipment and additional building space.
Capps says he will be hiring 31 employees for the Hawker work. More could be added if orders
pick up, he says.
The work and equipment being moved are related to stretch-forming — shaping sheet metal using
tension and heat.
The company had been talking with Hawker since the first of the year. Capps calls stretch-forming
his company’s core competency, which, combined with its relationship on other Hawker work,
made him feel the contract could be won.
“We felt strongly that we had a shot at it,” he says. “And they were very cooperative and very
aggressive in working with us.”
Capps can’t say whether any of the workers he will hire will come straight from Hawker because
he isn’t sure how many of those will be available.
He says the machinery he is buying from Hawker, including a 750-ton press, a 400-ton skin stretch
and a heat-treat furnace, can be used on work for other customers as well.
Move makes sense
Hawker spokesperson Nicole Alexander says the project reflects the company’s commitment to
try to keep work local.
“This is a good example of Hawker Beechcraft utilizing Kansas-based suppliers for additional
work,” she says.
In the case of Capps Manufacturing, the move just makes sense, says Cecil Miller, owner of Aero
Business Group in Wichita. His company helps suppliers win contracts with manufacturers but
didn’t work on the Capps deal, he says.
Given the size of the equipment involved — and the fact that Capps Manufacturing is well-known
in the industry for its stretch-forming — it would have been impractical to move the work very far.
Capps’ cost to buy the equipment and have it installed is $821,000, according to public documents
filed with the city.
“That’s the reason (Hawker) is keeping it local,” Miller says. “It would have been too expensive to
move that work to Mexico. … And Capps already has the capability.”

NEW YORK, NY, November 30, 2010 — Capps Manufacturing, Incorporated has been selected for the 2010 Best of Wichita Award in the Aircraft Assemblies & Subassemblies category by the U.S. Commerce Association (USCA).

The USCA “Best of Local Business” Award Program recognizes outstanding local businesses throughout the country. Each year, the USCA identifies companies that they believe have achieved exceptional marketing success in their local community and business category. These are local companies that enhance the positive image of small business through service to their customers and community.

Various sources of information were gathered and analyzed to choose the winners in each category. The 2010 USCA Award Program focuses on quality, not quantity. Winners are determined based on the information gathered both internally by the USCA and data provided by third parties.

U.S. Commerce Association (USCA) is a New York City based organization funded by local businesses operating in towns, large and small, across America. The purpose of USCA is to promote local business through public relations, marketing and advertising.

The USCA was established to recognize the best of local businesses in their community. Our organization works exclusively with local business owners, trade groups, professional associations, chambers of commerce and other business advertising and marketing groups. Our mission is to be an advocate for small and medium size businesses and business entrepreneurs across America.

Aviation industry supplier Capps Manufacturing is expanding. Capps is building a $2.4 million, 79,750-square-foot building adjacent to its plant at 2121 S. Edwards. The company also is installing about $500,000 worth in equipment.

“You have to grow or get pushed aside pretty quickly in this industry,” said Ron Capps, the company’s vice president and chief financial officer.

Last summer, the company bought the 50,000-square-foot former Food-4-Less building across the street. It is used for shipping, receiving and storing finished goods and raw materials.

The expansion will allow the company to increase its benchwork and subassembly work, Capps said.

“We do a little bit of it, but we want to move more into that,” he said.

More and more, planemakers are turning to their supply chain for fabrication and assembly work, Capps said.

“It puts companies like us in a very good position for growth,” he said.

Capps employs about 110 people, up from 83 employees a year ago. It will gradually add 20 to 25 employees, Capps said.

Like other subcontractors, Capps experienced a significant drop in business in 2001. It was the first time in its history that Capps had to lay off employees.

The recovery started in late 2004. Since then, the company’s backlog of work has tripled.

Capps’ father, Barney Capps, began the business in his garage in the 1960s. He left his job as plant manager of H&H Parts in 1983 to run the company full time.

Ron Capps joined his father in the business in 1999.

The company makes components for a variety of aircraft, including Boeing’s 737, Hawker Beechcraft’s Hawker 8000, the F-18, Bombardier’s Challenger 300, all Learjet models and many models of Cessna Aircraft jets.

It is also making the leading edge of the vertical stabilizer for Boeing’s new 787 Dreamliner.

Capps Manufacturing has been featured several times on Inc.com as a company who has generated at least $2 million in revenue in 2013; is a privately held, for profit; based in the U.S., and independent.

View the complete article at the Wichita Business Journal.